Monica Aissa Martinez Paints To Understand The Electricity Within Us

Monica Aissa Martinez illuminates the worlds existing within us with a bright palate of pink, blue, and yellow tempera. She investigates networks of nerves, organs, and cellular structures to understand how they work, documenting her process in a blog that she has kept for years. Although her interest was sparked by the philosophy and spirituality that comes with practicing yoga, it has been driven by science and medicine in recent years.

However, she is not a medical illustrator. Although accurate anatomically, she takes liberties with color. “Many of the studies are a result of someone bringing me a model or a book,” she explains, as was the case with her studies on the pelvic wall. However, she researches more than anatomy; she uncovers theory, mythology, and root words in her posts. She is always concerned with the details. Always concerned with the source. 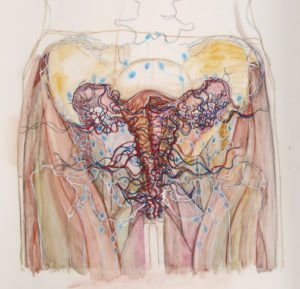 Ovaries hold that which waits to be born within us, that which can only be born through us. They support a female’s unique creative potential, especially that which we create out in the world outside of ourselves. –Christian Northrup MD

She spends years exploring topics, but usually finds that they are about “being a woman, a Latina, but really, in the end, it’s about being a human… a body.” Her walls read as a retrospective, including painted environments, early works on paper, and a few collaborations. “As you walk down my house you see older work,” she explains, welcoming us (my mother and me) into her living room. She points to a couple of paintings, “This is 2000 maybe, and that one is from 2007.”

She takes us to her studio located in the back of the house. Large windows let in a lot of natural light and her drafting table is on casters, giving her full mobility around the space. Skeletons, models, and knickknacks line her shelves. Her back wall is a tack board, displaying her studies on paper as well as a material given to her by an architect friend. “He gave me the whole roll, but it did not have a label… I want to say mylar,” she explains. She uses the transparent material to section off her studies into nerves, bones, and organs. 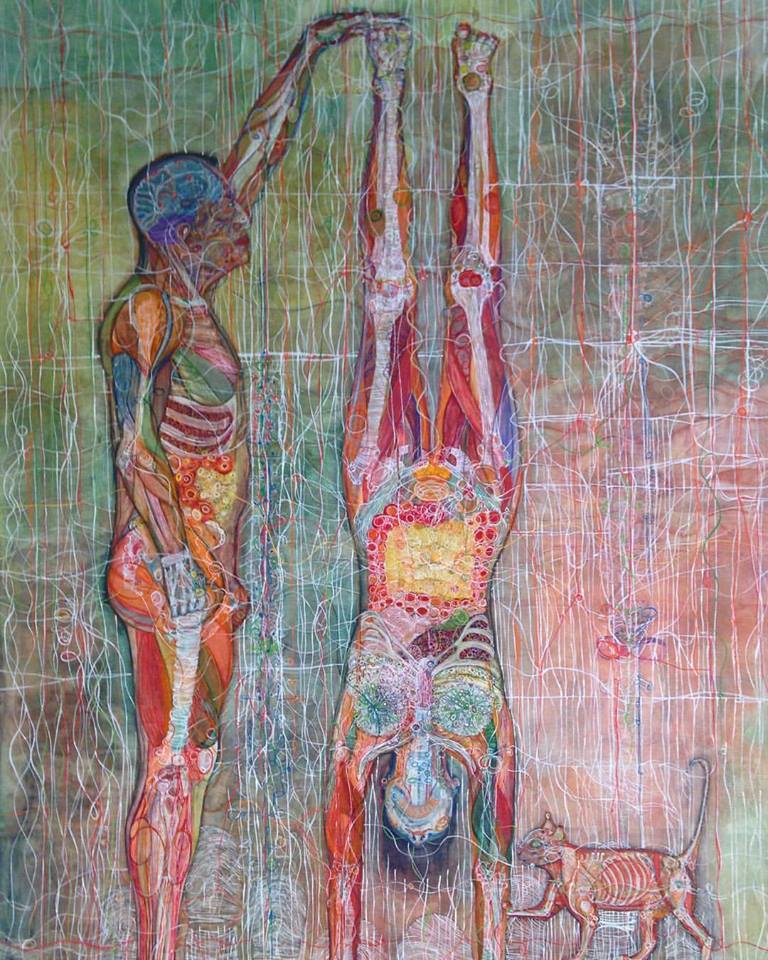 A massive family portrait–her largest canvas to date–is tucked in the corner of the studio. Although she has received inquiries from collectors, she admits she is just not ready to see it off yet. “I think that these works need to be exhibited together first,” she rationalizes. The life-sized work depicts her husband steadying her handstand, while her cat bats at her hair in the lower right corner. Her adorable cat, who was unabashedly cleaning his paw in a triangle of sun in the driveway when we arrived, makes an appearance in a couple of works. However, he was not her first animal model. In fact, her studio is lined with misquotes and various insects and her desk currently displays her study of the coyote wandering the suburban streets.

The animals are painted onto canvas collaged with a map. “Each map tells you where that bug or animal comes from because people give them to me,” Martinez explains. The coyote is painted on a map of the greater Phoenix region. He has become a recent celebrity due to his casual demeanor while strolling the streets of the densely populated areas. She is interested in influencing the narrative. “I did this as research so we can educate ourselves…so we can coexist.”

Education is often what she strives for when creating a portrait. In a blog post from August 2016, she was contemplating her work, Portrait of Sophie (Study of Trisomy 21). She writes about her conversation with the girl’s mother, Amy Silverman, “When I talk with her about my interest in drawing Sophie, her daughter, I explain I want the work to serve as education. First I have to educate myself and in the process (mustering up all the elements of design I can) maybe I educate you.”

Luckily for Martinez, she has a great teacher. In the finished painting, the girl is proudly holding her arms above her head. Martinez recalls that she had just gotten out of ballet class and felt very open. Sophie pointed out things she hoped Martinez would share in the portrait, including her fissured tongue and slanted eyes. Also pictured is the Trisomy 21, or the extra chromosome that causes the Down Syndrome characteristics. Currently, Martinez is preparing to give a Mini-Med presentation on the genetic disorder with Silverman, for the “students, faculty, and anyone interested” at the University of Arizona in Tucson.

Originally from El Paso, TX, the artist ventured to Las Cruces, New Mexico for graduate school. She and her husband, an engineer, relocated to Phoenix for him to finish his studies, intending only to stay a few years, but are now fixtures in the community. Although she began her artistic practice as a ceramist, she hardly touches the wheel nowadays. As a drawing major with an emphasis in printmaking in college, most of her work was monochromatic, mostly black and white, a drastic difference from her current works. Standing before her intricate and colorful paintings it is hard to believe that she did not pick up a brush until after graduation.

Every now and then, you can spot her influences, which include Leonora Carrington, Remedios Varo, and Frida Kahlo. Two small studies in the living room exploring the artist’s senses bear a likeness to Henry Ford Hospital by Kahlo. “That is one of my favorite works by the artist along with What the Water Gave Me. I like the way she does that, she sort of dissects herself.” Aside from using the same materials of egg tempera and casein, she also pulls influence from the color and mythology in their work.

Her first solo show, élan vital, was hosted by the New Directions Gallery at the Scottsdale Center for the Arts in 1998. “How lucky, right?” she says humbly. She continues to exhibit around the state and beyond. In 2014, she was chosen for the exhibition, State of the Art, at Crystal Bridges Museum of American Art in AK, narrowed down from 10,000 emerging artists, but there is surely more to come and I am certainly interested to see her next study.

Add the artist on social media to learn more about her work and upcoming projects.

Martinez Spoke with Diana Ledesma at her studio in Phoenix on March 11, 2017.

Images courtesy of the artist.

State of the Art Exhibition at Crystal Bridges

Diana Ledesma is an arts professional living in New York City. She obtained her masters from New York University in 2016, completing her thesis on the status of the Mexican American art market.

Send Us Your Stories!

Please limit submissions to 1000 characters and do not forget to send pictures!